The Tilburg Urban Farmers Community is part of the Urban Farmers for a Liveable Brabant project. The project aims to strengthen and expand the urban farming communities in the cities of Tilburg, Den Bosch and Oss in the southern Dutch province of North Brabant. More precisely, its objective is to “create a larger impact of urban farming on the economy and society in a bottom-up way”. One of its sub-projects, driven by CommunitySense, is to literally map the Tilburg Urban Farming Community.

What does it mean to map a community? Traditionally, projects are often evaluated by the concrete deliverables they produce. However, when stimulating the growth and impact of a community or social network, this is too limited a measure. Just as important, if not more important, are the relations and interactions which emerge “below the surface” among the community members themselves and between them and their stakeholders. To stick to farming metaphors: in bamboo and other grasses it is not so much their shoots (”the products”), but especially the densely branched root system (”the relations and interactions”) which matter for future growth and impact.

How to visualize this “community root system”? To this purpose, we use the new online tool Kumu. Its motto stresses why this is such a suitable tool for our purpose:

Harness the power of relationships. Kumu gives you the tools to track, visualize, and leverage relationships to overcome your toughest obstacles.

The essence of Kumu is that you make a map consisting of elements (e.g. activities like “projects” and their “results”) and connections (relations and interactions like “informedness” or “involvement”) between the elements. On the map, you can define different perspectives, in which Kumu only shows those elements and connections which interest you at that moment. To define perspectives, you can apply specific decorations and apply various kinds of foci and filters.

In this way, the whole being larger than the sum of its part can be shown (the total map), while it is also always possible to just display the particular part of the map most relevant to a particular stakeholder in the most effective way (a perspective). For example, an organization may be especially interested in its direct links with the activities in which it is involved in the community. Kumu therefore allows for only a partial map to be shown by applying a specific focus or filter to the total map.

Our set of core elements and connections, as well as their visualizations in Kumu, keeps evolving, driven by the developing applications of the community map.

Elements can be visualized by their own colors, icons and sizes. At the moment, we distinguish the following types of elements:

The essence of communities is not so much formed by these elements on their own, but by the kind,  quality, and number of connections that emerge between them. In increasing degree of involvement, we distinguish the following basic kinds of connections:

In Kumu, connections can be visualized by the combination of type, color, and width of their lines. For example, we represent Informedness by a thin blue line, whereas Producing is shown as a thick red line, indicating its much higher community-building contribution.

The community map consists of the total set of elements and connections representing the community. A snapshot of this map looks like this: 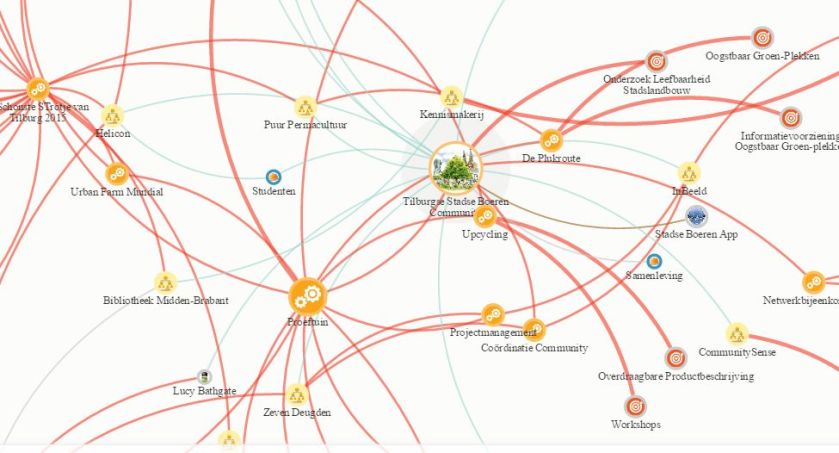 For the latest “(a)live” version of the community map click here.

One of the most powerful features of Kumu is its ability to create and share advanced perspectives on the map. One feature is that the tool allows you to focus on particular elements. A useful property of focus-perspectives is that they can be shared as a link, so that by clicking it, one can always see the latest live version of these perspectives. Some examples:

Another type of perspective consists of filtering out particular elements and connections. For example, it could be useful to community managers to get a bird’s eye view just of which organizations are participating in what activities. This means going to the filter-menu and selecting only the checkboxes for the Organisation (”organisatie”) and Activity (”activiteit”)-elements and the Involvement (”Betrokkenheid”)-connection: 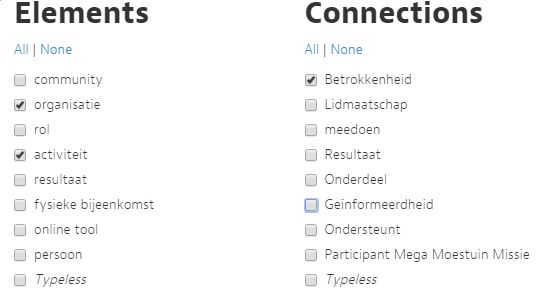 Filter-views cannot be shared as links (yet), so they need to be manually configured every time one wants to see this perspective. (Part of) the resulting perspective is the following:

One can now easily see that several organization act as natural “bridges” between two main community activities, making them likely candidates to involve in organizing a joint event between those activities, for example.

This short introduction is not supposed to be exhaustive, but to inspire and get readers to think about finding other creative and effective ways to use community visualization tools. There are many other interesting Kumu features and ways to use them. For example, there is a whole array of “metrics”. The Degree-metric, for instance, gives an indication of which participants are likely to be local hubs and connectors within the community. Like filters, metrics also cannot yet be shared as links. Instead, they can be accessed by clicking the metrics-symbol at the bottom of the map:

A community map is never finished and needs to be updated regularly. However, community mapping is not just about collecting the data and creating the map. Just as important, a community needs to think how to read and use it. Additional perspectives and uses will be developed as the community mapping requirements become clearer and new Kumu functionalities become available. Spin-off experiments have already emerged, like an initial map of the community network of Science Hub Brabant and a map-in-progress of the urban farmers network in the city of Den Bosch.

All of this has inspired me to think hard about how to turn such experiments into a real “participatory community mapping methodology”. Plenty of inspiration for future research & development…